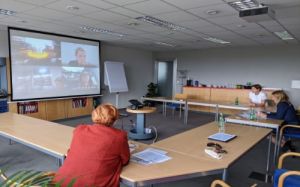 BERNDORF (25 September 2020) –Sharing experience, supporting female young professionals and raising awareness of women in management roles – these are the principal objectives of the Women’s Network established in 2018 by women in management in the Berndorf Group in Austria. After two successful years getting the network up and running, the idea is now bearing fruit internationally. The platform’s first international meeting, held on 24 September in a hybrid online and offline format, allowed the network to reach women outside Austria with management responsibilities too.

The international meeting attracted considerable interest and no less than 18 women registered to take part, reported organisers Karen Fanto (Berndorf Bäderbau) and Karin Moser (Berndorf Band Group). Participants came from a wide range of countries, from Germany to Mexico. “A colleague of ours in China was determined to take part, too, even though the event started at midnight local time,” said Fanto. The only disappointment: due to connection problems, unfortunately the link to China could not be established.

Berndorf companies attractive employers for women
Technical glitches aside, the connections in the Berndorf Group Women’s Network, which started as an initiative by Berndorf Bäderbau and the current chair of the Group’s Supervisory Board, Sonja Zimmermann, are proliferating on a daily basis. The network is enjoying ever greater success in building mutual trust between network members, and promoting the attractiveness of the technical and commercial professions in the Berndorf Group to young women.

Including and sharing know-how beyond Austria’s borders
In Austria, the network is now supported by Aichelin, Berndorf Band Group, Berndorf Bäderbau, Hasco and Berndorf AG. “Exchanging experience during the Corona crisis early in 2020, for instance, proved to be especially valuable for members of the network. We were able to hold online meetings on a weekly basis during that period,” Karin Moser reported. The expansion of the network’s activities means that women in the Group both inside and outside Austria will be able to benefit from this kind of know-how transfer and the exchange of best-practice examples globally.