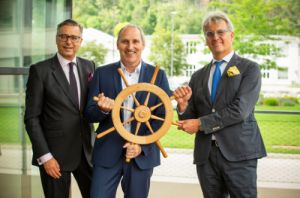 BERNDORF (2 July 2020) – Unaffected by the coronavirus pandemic, Berndorf AG completed the change in the senior management team, which has been planned for the past two years, in the middle of this year. After 12 years as CEO and 30 years on the Management Board, Peter Pichler has made way for former CTO Franz Viehböck. Austria’s first and only astronaut has been part of Berndorf’s management team for 18 years, and together with CFO and fellow board member Dietmar Müller he will head the Group, which employs 2,300 people, into the future. In 2020, Berndorf AG will largely be in a position to maintain its current course, thanks to its liquidity reserves and current order book. Stability is also a defining feature on the ownership side. Majority shareholder Norbert Zimmermann, who headed the management team that took state-owned Berndorf AG private, stepped down as chair of the Supervisory Board in March this year and was succeeded by his daughter Sonja.


Virtues that have enabled the Berndorf Group to overcome setbacks and become a global market leader through its 60 or so subsidiaries in various high-tech fields have also shown their worth in the current crisis. They include continuity in the Group’s approach and agile responses, as well as the financial independence that has been achieved in the 30 years since its privatisation, says new Berndorf AG CEO Franz Viehböck: “All of the Group companies have had sufficient liquidity during the crisis. Our plant engineering business has performed particularly well. This is due to the fact that some orders have a turnaround time of almost a year – so work on them began well before the coronavirus lockdown. Other members of the Berndorf Group have faced challenges of one kind or another as a result of the coronavirus crisis. But we have responded with measures in all of the areas that have been affected. Many of our managers have experience of dealing with crisis situations. They are familiar with the challenges we faced in 2008-09. We have set ourselves a target: we want to move into the future with all of our subsidiaries, so it’s essential that we take appropriate steps. Once we’ve reached the future, we’ll be so well placed that we can also shape it.”


Success factors during the crisis: liquidity and trust
Production continued uninterrupted at most of the Group companies in Europe, which operated in full compliance with health and safety regulations. Only one employee at the Berndorf site tested positive for coronavirus. According to new Supervisory Board Chair Sonja Zimmermann, management’s swift action at the beginning of the crisis played an important part in putting Berndorf AG in a strong financial position: “Firstly, the Management Board ensured that the Group had the highest possible level of liquidity. As a result, we didn’t run out of two key things – money and trust. At Berndorf AG and many of the subsidiaries, we can count on people who have dealt with crisis situations. They know how to get things back on track.”


Pichler hands over reins at Berndorf AG with without trepidation
Presenting a united front and acting quickly in a crisis helped to forge close ties between the formerthree-man Management Board – Peter Pichler, Franz Viehböck and Dietmar Müller – 11 years ago, as the Group emerged from the global financial crisis sparked by the collapse of Lehman Brothers. As a result, Peter Pichler had no doubts about handing over responsibility for Berndorf AG to the new management duo, in spite of the current difficult situation: “With Franz Viehböck and Dietmar Müller in charge, I’m sure I won’t be missed on the Management Board. That made it easy for me to step down – as planned and without any worries at all – in the middle of 2020.”


The Berndorf Group in 2020: new, leaner structure
The new two-man Management Board will head a newly reorganised Berndorf Group that has been streamlined by around a third since last year. Automotive specialist stoba, which is headquartered in Backnang, Germany, was spun out to Berndorf AutoMotive AG (BAMAG) last year. With its expertise in precision engineering, and after eight years as a Berndorf Group company, stoba was ready to stand on its own two feet, according to Berndorf AG Management Board member Dietmar Müller: “With the significantly greater leeway that we have given stoba in the new organisational structure, in my view we found a very good way to plot the stoba Group’s future.” The owners of the newly established BAMAG holding company are the same as those of Berndorf AG, so stoba will remain part of the extended Berndorf family, as a sister company of Berndorf AG.


Viehböck’s goal: earnings growth coupled with environmental awareness and high-potential innovation
As far as the companies remaining in the narrower Berndorf Group are concerned, Berndorf AG will maintain its focus on innovation and measures designed to boost earnings. Projects approved under the Group-wide Berndorf Innovation and Technology (BIT) innovation promotion initiative, which was launched two years ago and will provide EUR 20 million in funding, have also continued during the coronavirus pandemic. This will enable the Group to make significant inroads on the market with new products once the crisis is over. With this in mind, Berndorf AG CEO Franz Viehböck believes it is important that all nine projects currently under way are completed. Promising ideas and approaches should also be brought to market beyond the various funding programmes, says Viehböck, turning the spotlight on the ‘new normal’ after the crisis: “30 years ago I went into space and I can show everyone pictures of Earth as I saw it back then. For instance, the Aral Sea isn’t blue, it’s a white fleck. And forests were being burned in those days, too. At Berndorf, this is our opportunity to make a contribution to the positive development of the planet. Everyone needs to realise that what’s good for the environment is also good for us financially.”


Owners committed to qualitative growth in Berndorf
In line with this philosophy, Berndorf AG aims to retain its focus on qualitative growth in future. To begin with, Management Board Chairman Viehböck plans to focus on consolidation following the acquisition of four businesses during the Group’s last major expansion in 2016. He wants to wait two to three years before taking the next steps in the Group’s expansion, and in this regard he is on the same wavelength as the owners’ representatives on the new-look Supervisory Board. This year, Gerald Grohmann (CEO of SBO AG) and Wolfram Littich (former CEO of Allianz Austria) have replaced Norbert and Wilfried Zimmermann, and in 2021 former Berndorf AG CEO Peter Pichler’s seat will be taken up by Thomas Riecker. Supervisory Board Chairwoman Sonja Zimmermann is optimistic: “Any decision on whether and when to make new acquisitions will always depend on how our results are looking and how long the current crisis lasts. If our figures look good, there’s a strong chance that we will expand the company.”